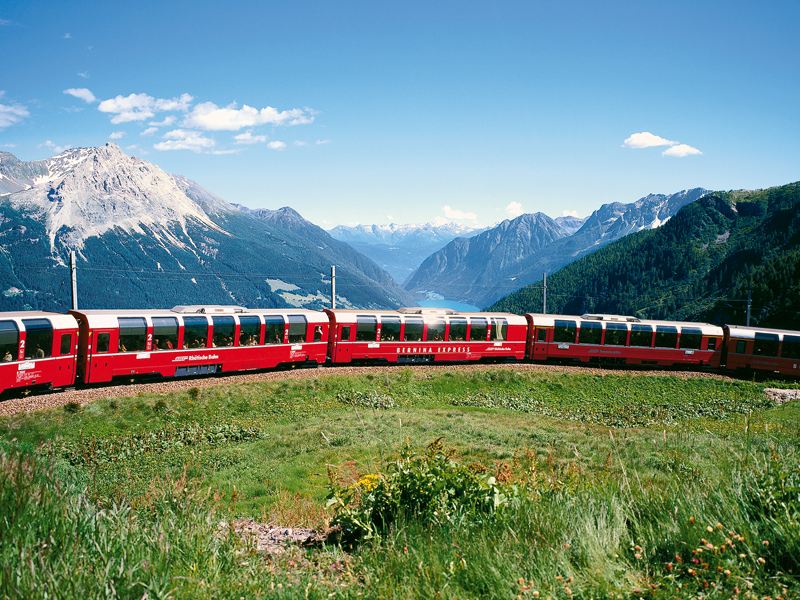 The Rhaetian Railway is one of the most famous narrow gauge railway lines in Europe. It is not only "a means of transport" that comfortably takes travellers from one point to another, but, above all, it has become over the years a way of living nature comfortably seated in comfortable carriages and seeing, as in a movie, the views of the Alpine valleys, the waterfalls and the streams that with their noise compete with the twittering of countless types of birds, from the cute merry-go-rounds to the majestic eagles.

The Bernina Express climbs snowy mountains, almost defying gravity, thanks to the work that man has managed to do by integrating great engineering works with the surrounding environment. Here is the first "jump"... the helical viaduct of Brusio (Switzerland) that we meet a few minutes after the departure from Tirano (Italy). A construction that allows the Bernina Express to easily overcome a sharp difference in level. But it's just the beginning of the journey...

The route from Tirano (Italy) to St. Moritz, a well-known town in Graubünden, is a succession of landscapes ranging from the 429 metres above sea level of the customs town (with a passage in the centre next to the Basilica of Our Lady of Tirano) to the 2253 metres of the station "Ospizio Bernina", on the homonymous pass, which divides the Val Poschiavo from the Engadine. On this route there are numerous possibilities to stop and take alternative walks such as the magnificent Roseg Valley or the parallel valley of the Morteratsch that allows you to reach the foot of the homonymous glacier.

The line then continues on the "Albula section" from St. Moritz (and Pontresina) to the capital of Chur, the oldest of the Swiss cities. Even this route will not disappoint the long-awaited traveller. Just remember the majestic viaduct of the Landwasser which, with a height of over 50 meters, is one of the most important works of the line (the construction is from the early 1900s). Since 2008, the Bernina and Albula lines have been a UNESCO World Heritage Site, extending the important list of jewellery that Switzerland as a whole has made available to travellers.

A trip on the Bernina Express deserves your attention!